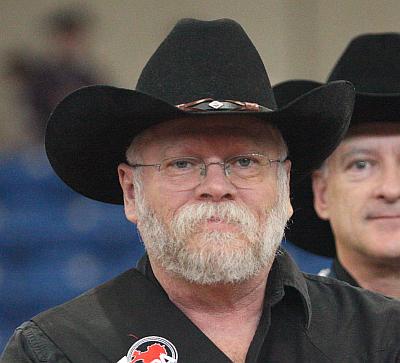 Frank was born in 1952 in North Carolina and moved to Northern Virginia just outside Washington DC, at age 11. He met his life partner Tom in 1993 and was finally able to marry him in 2015. Frank and Tom went to their first Gay Rodeo in 1996 and Frank got involved in his local association in 2001. By 2006 he was involved in Gay Rodeo at the International level mostly working behind the scenes. In 2011, Frank started the Gay Rodeo History project and created the website GayRodeoHistory.org. Frank lost his husband to alcohol poisoning in 2018 and has begun his second life as an RV full-timer traveling and attending as many rodeos as he can get to.

The eye candy is terrific.

It wasn't a serious injury--just pulled a muscle in my arm, but that was enough of that, so that ended my barrel racing.

What does it mean to be a cowboy or cowgirl and are you one?

I think being a cowboy is more than just simply working cattle or horses. It's a, way of looking at life, and I try to uphold that as much as I can.